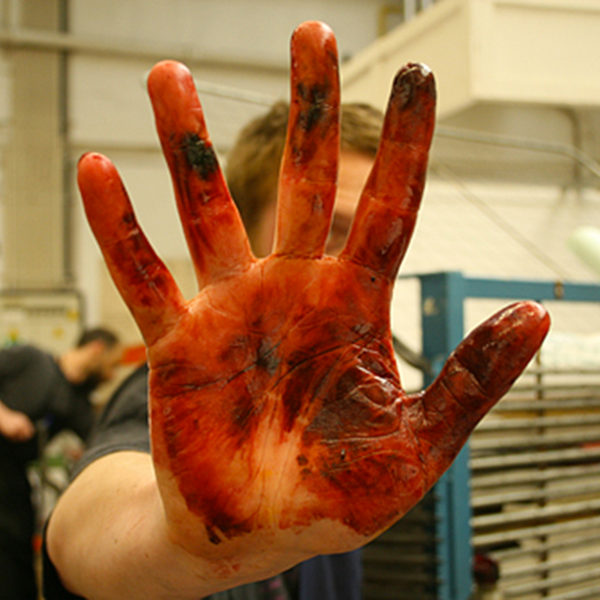 When the last print run of the job is done...

if i remember well, its was online with The Studio On Fire’s blog.
Then i got stuck with Stukenborg’s work with dice.
But the biggest crush i had was with the tray full of brass rules.

RHoK Academie brussels. A brussels evening classes for adults. They might have one of the biggest lithographic press from Belgium (maybe Europe). They focus mainly on etching and lithography but they bought a Vandercook SP20 around 2010-11.

I was lucky enough to learn on that beauty (i miss you darling).

Internet. Tumblr and all those images blogs.

Also, the first print I made with brass rules I was trying to transpose Ryoji Ikeda’s digital art into analog… So, I can say the Raster Noton's esthetique as well as Op art influenced me.

Being less grumpy. i try hard, but it seems winning often. And teleportation.

Alone, so i can be grumpy at me only

when the last print run of the job is done. And then its too late...

hard to tell… Futura in capital, a Fraktur or something modernist

Without a doubt Anni Albers, El Lissitzky or Vincent Connare

To fix her... I hope she's gonna be fine super soon. Then, to get more fonts and brass rules. I own more brass rules than fonts ATM... It's ok but a bit restrictive. Or it pushes you to be imaginative.

Always. When i'm not grumpy

running out of kimchi or new ideas.

i think its useless but it helps to spend Sunday at something i like.

I'm still a bike repairman for 2 more month, then i don't know yet.

records as a label manager and time to time dj. silkscreen sometimes.

Ha, it's maybe from this musical side that i've chosen to use a nickname. Well, i was stupid enough to choose one with another name and sure name, but now, you can call me David, Dave or Dimitri Runkkari, it should work. Ho, don't hesitate to Google translate it :)