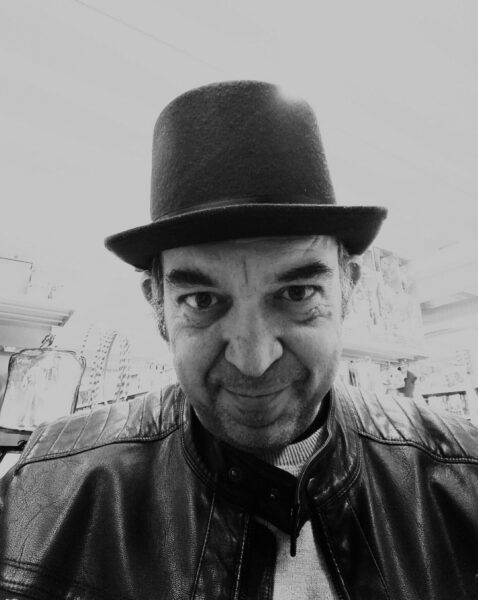 An accident that happens involuntarily in my head

I started printing in 1994, when I was studying engraving and woodcut at an art workshop in Milan (at the publisher Raffaele Bandini, with printer Moreno Chiodini). In 2007 I bought the first typewriter and letterpress printing begins.

Relief printing such as xylography led me to become passionate about the printing house I met with the publisher Alberto Casiraghi (Pulcinoelefante editions) in 1998. In his studio I was able to learn typographic composition and rudimentary printing systems. Short texts were composed as aphorisms combined with images. From that magical world of printing I never came out again.

The people who taught me typography have always been Italian publishers who make artist's books. The first was Alberto Casiraghi then Roberto Dossi with his publishing house, I Quaderni d'Orfeo, and finally the meeting with the greats of LetterPress Workers.

I love working in a collective way, also because for several years now I have been bringing a project called Collective Typographic Art to schools and psychiatry, which takes place in groups. Together we develop a written message combined with xylographic images to communicate something ironic and social. I love the art of protest and social criticism and I have found the best way to express myself in typography.

What I appreciate in working with others is the exchange not only of technical knowledge but of thought, creating something by sharing it.

It is very difficult to explain how my ideas are born, I prefer to compare them to an accident that happens involuntarily in my head: between images and words. I usually live in symbiosis with a notebook where I write down fragments of words, dialogues, images. They are very messy notes that I sometimes go to review and become hints for my posters and postcards. I like to work with printing machines that are entirely manual and without electricity. To return to the original printing, the one our predecessors did for centuries.

The cross of the mortuary posters, is too beautiful and ironic.

A small self-built press that works like a mini Gutenberg press with which I make my postcards. I like to build small presses to spread the press among the public and outside my studio. It is my dream to take the printing press outside, in a park or at the exit of a metro is my dream.

Those on the history of cooking and food that I use for an editorial project dedicated to food as horror, invention and delirium. The project is called Gastroorcherie. A word reminiscent of ogres and filth.

I have a studio in a room of my house, and I have manual machines, the most important being a Saroglia press from Turin in the 1930s.

I would like to have more typefaces and an extra press. I feel far away from many of my colleagues who aspire to collecting. If you have ideas, you can even work with very little.

My greatest happiness is to be told that a poster or postcard of mine has made a person happy or my message has brought a smile to the day.

Not getting to people with my message, my irony often meets with much disapproval, it is considered fierce. But that is what I want to trigger critical reflection in others.

The typography for me, before being a scenario of graphic aesthetics, is a human experience of written communication that from the beginning I wanted to combine with images. Just as it used to be done in the past. The other aspect is its craftsmanship in contrast with contemporary technological systems. Typographic printing has historically been a cultural revolution comparable in intensity to the Internet. When you have typefaces in your hands you are invested with a very strong power, that of being able to use words, more than handwriting itself.

With great difficulty I try to maintain the work of typographic art with the production of posters and postcards, I have an audience of my own that follows me and buys by appreciating the aesthetic power of protest communication.

Yes! As I explained earlier, I use xylography and linoleumography, techniques that are part of relief printing such as typography.