At the end of September 2017, a group of friends from the letterpress world met up in Cornuda (Italy) to work together at the Tipoteca Italiana Fundazione. During the week, I kept a diary that I posted on social media. Here is a slightly edited version of it.

Most of us spent the day travelling to Tipoteca and it was only in the evening – during our first meal at the restaurant Guarnier – that we started making our plans.

We spent the morning discussing, sketching and meeting with Silvio Antiga, the founder of the museum. After our lunch we set to work. Our plan is to print a small folded booklet, ten panels, with on the reverse side a poster. We advanced well on the poster and will start printing the first run of the five colours on Wednesday morning. We will probably end up with a team printing and another team starting the typesetting of the ten panels. Michael will hopefully arrive as well, as he had to deal with an inflammation of the ear. Our team will then be complete and consist of John Christopher from Flowers and Fleurons; Richard Ardagh and Graham Bignell from New North Press, both in the UK; Stephane de Schrevel from Belgium; Michael Karner from Austria and Sander Pinkse and myself from the Netherlands. 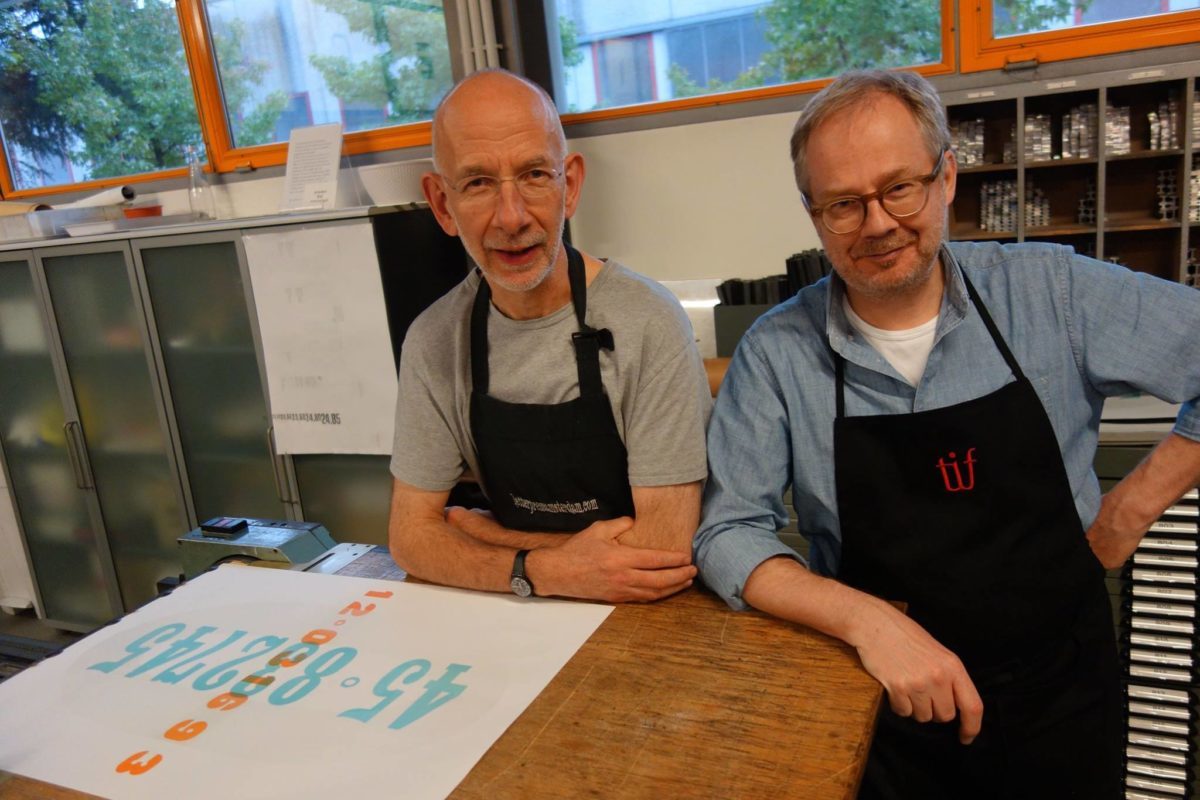 Michael Karner arrived on in the morning – got quickly introduced to our group – and within half an hour was happily setting away some texts for the captions. One half of the team was preparing the forme, the other half was busy on the FAG test press printing the oversized wooden ‘0’ (70 cm in height!). It actually consists of two halves, each measuring 35 cm. Our print run is 400, and this meant that speed had to be build up. The forme with the numbers is taking shape, some proofs were pulled and a rough paste up made as well. At the end of the day Sandro Berra treated us to a visit to the huge warehouse where more treasures are being stored. Stacks and stacks of wood type, all neatly packed and labelled, printing presses and other printing equipment that has been cleaned and restored sits there. A workshop with all the equipment to repair and restore is at the disposal of the team that takes care of it. 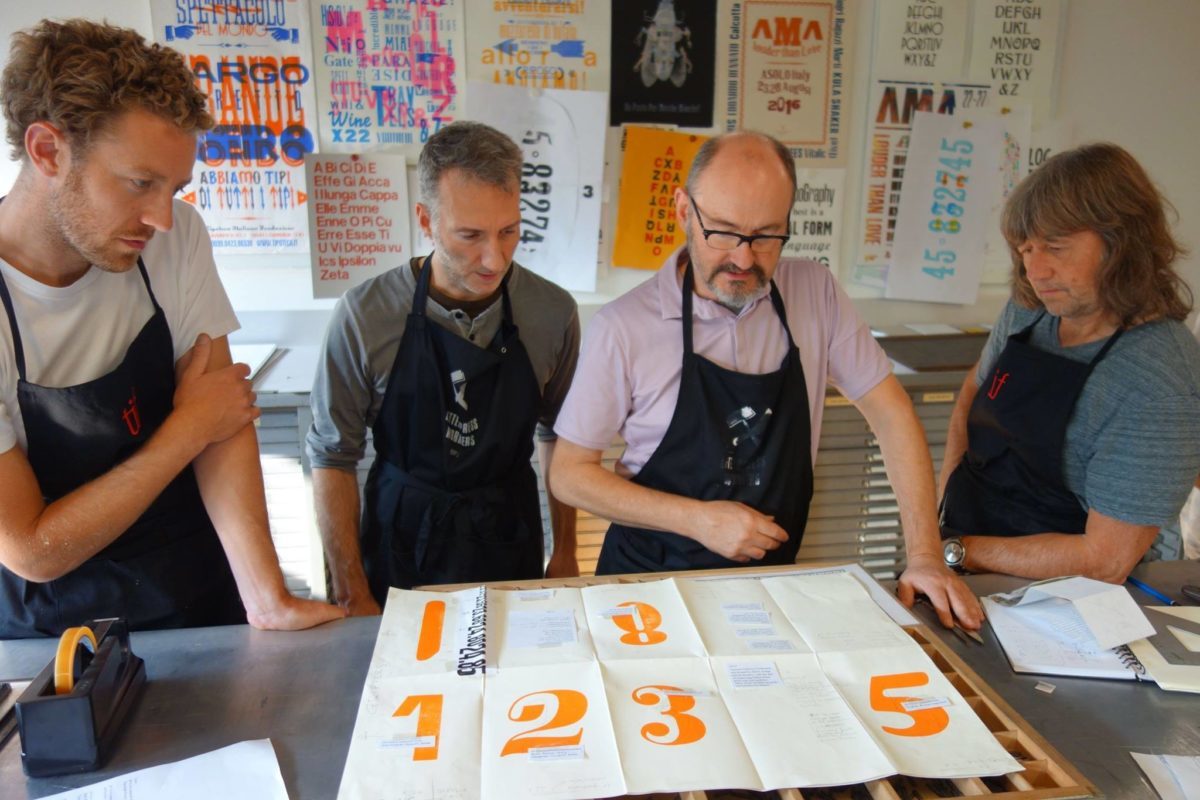 We kicked off our third day at Tipoteca Italiana with the printing of the second colour, a greenish-blue. Soon we had a good workflow and by the time we went for lunch, the print run was done. After lunch at La Corderie, it was back to work again. One group busily printing away, the other group copywriting, planning and typesetting. In the early evening, we drove to Treviso, where we visited Paolo Celotto in his beautiful workshop. It’s hard to believe, but he only started four years ago with printing and the amount of type and equipment that he has found is amazing. Dinner with Sandro Berra before driving back to Villa Bolzonello… 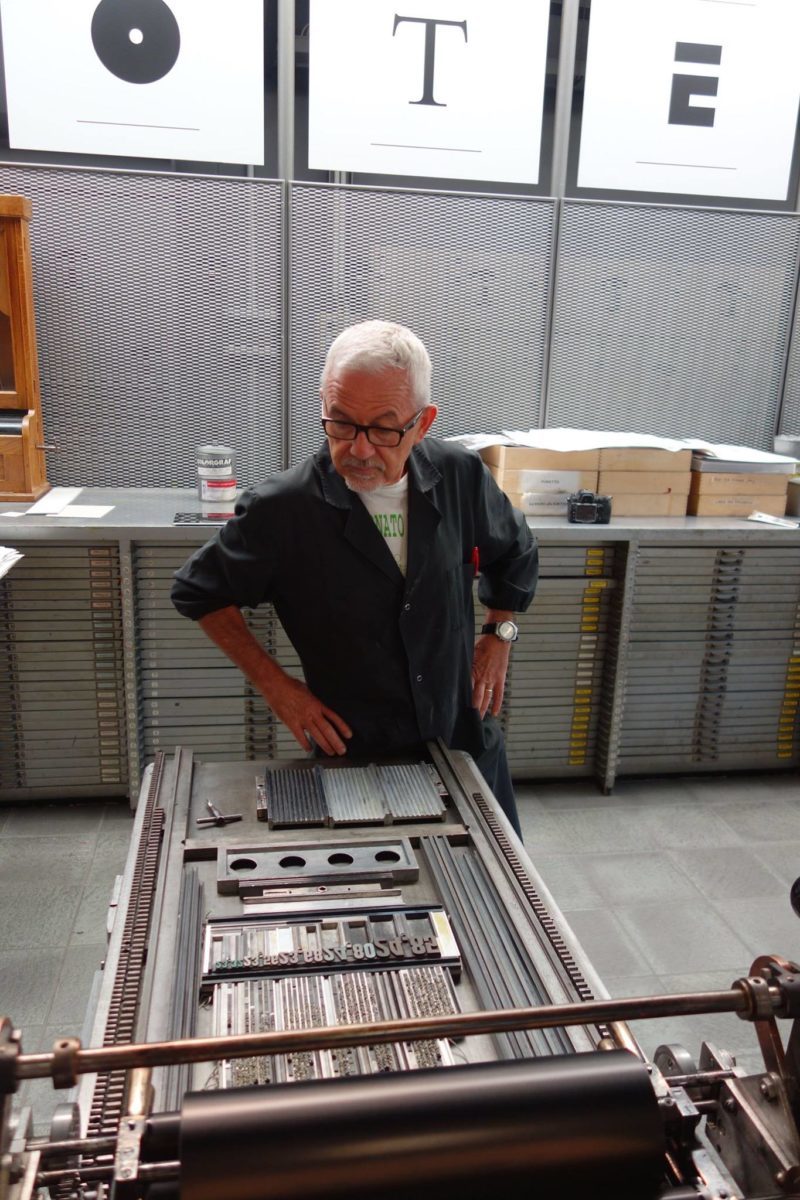 Upon arrival at the Tipoteca Italiana the two groups set immediately to work. On the poster side of our publication, a pistachio green colour had to be printed. Graham Bignell mixed us a nice amount of ink and soon the press was running. On the central island, text was being set, proofed and corrected. After lunch across the road at the Corderie, Leonardo took us to the library, where we were able to handle some books printed by Aldus Manutius; the Manuele Typographico by Giambattista Bodoni and as a very rare copy of a publication by Bodoni, set in Fournier types. John Christopher became quite ecstatic seeing all these beauties. We finished the day with building the forme for the black texts that will be printed on tomorrow. 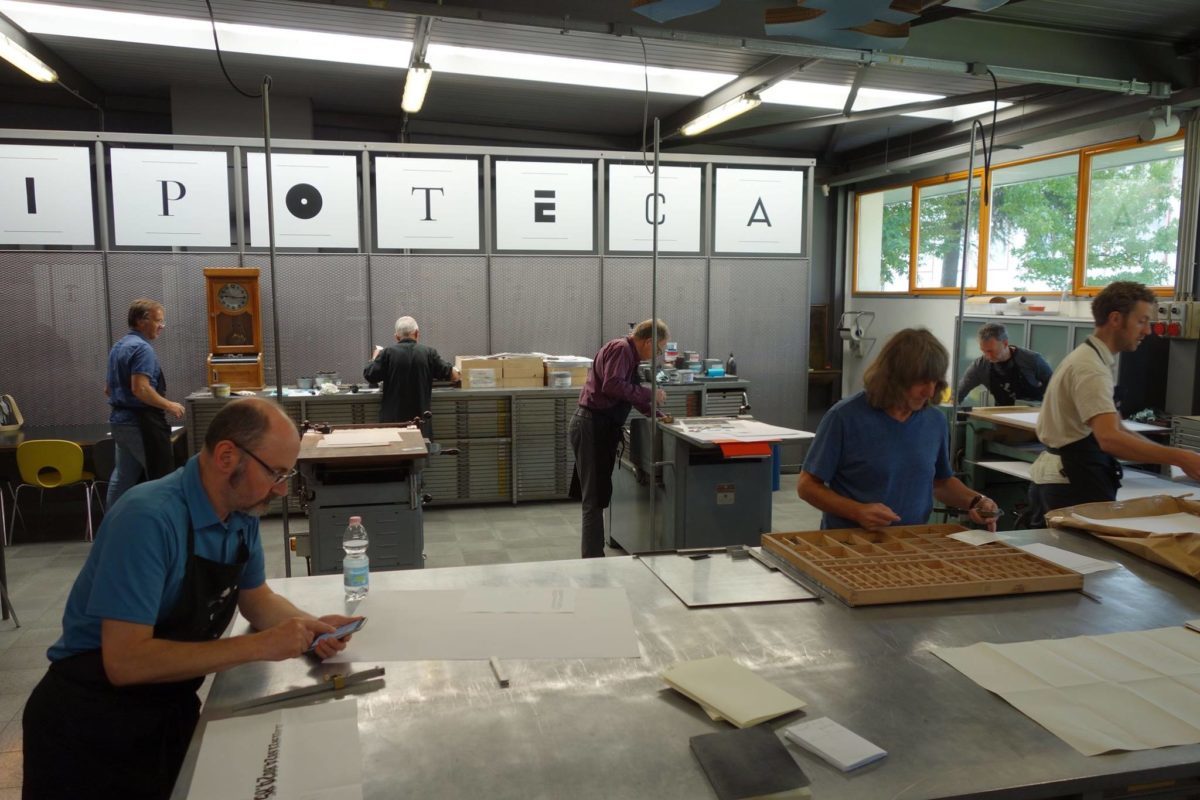 Our last day at the Tipoteca Italiana! The week did fly by… After having printed colour all week, it was time to print the black forme. The forme table was used to get the black forme onto the FAG press that we’ve been printing on during the last few days. Graham Bignell and Richard Ardagh were busy with the belly bands, John Christopher and Michael Karner setting up the type, while Sander Pinkse, Stephane de Schrevel and myself took care of the printing. By the end of the day, we had a visit from Silvio Antiga, the founder of the museum, and we presented him with the first copy of our effort. Sadly enough, Michael wasn’t there as he had to drive back to Austria. A brilliant week it was, Gentlemen of Cornuda! A la prossima… 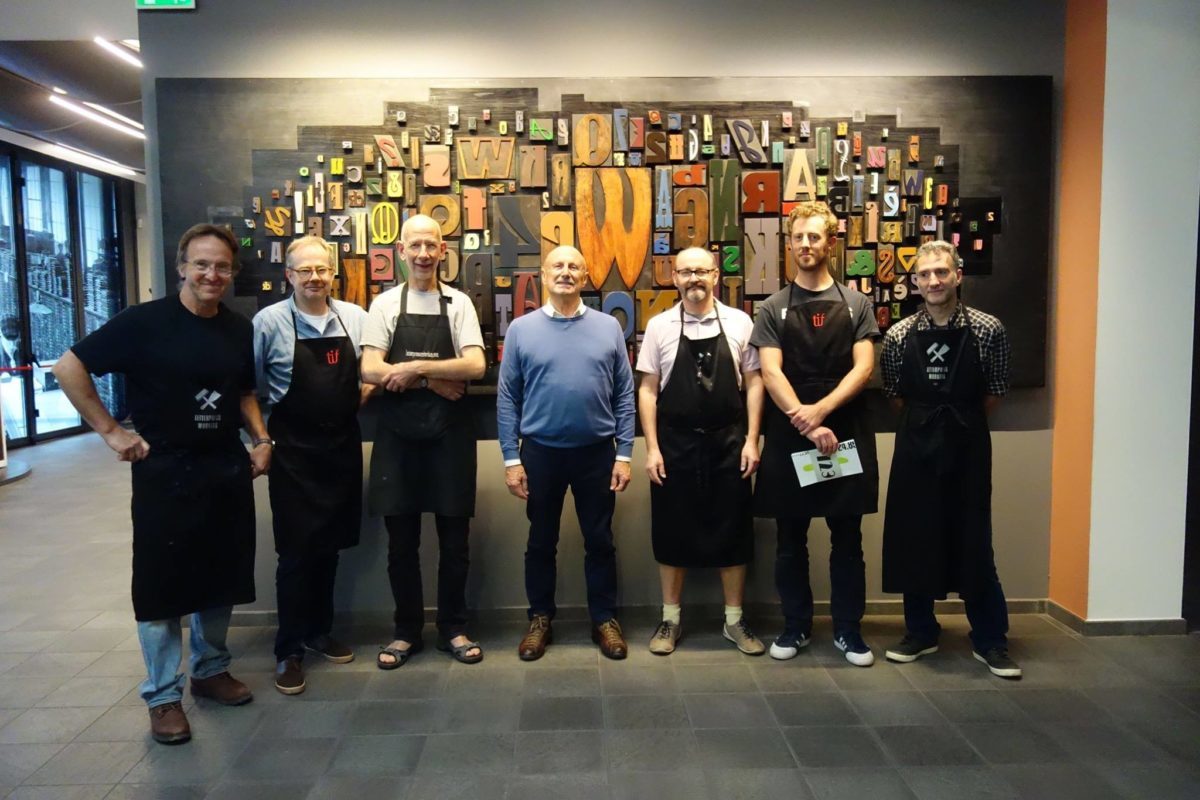 As mentioned before, Saturday was our last day at Tipoteca Italiana, but not our last day in Italy. The seven ‘Gentlemen of Cornuda’ travelled to Treviso, where they wandered around, visited an exhibition – fin de siècle posters – and had lunch with Sandro Berra, his partner Ferena Lenzi and her daughter Marta, before returning home… It has been a fantastic week, with hard work, good food and wine, long conversations and laughter and deeper friendships! 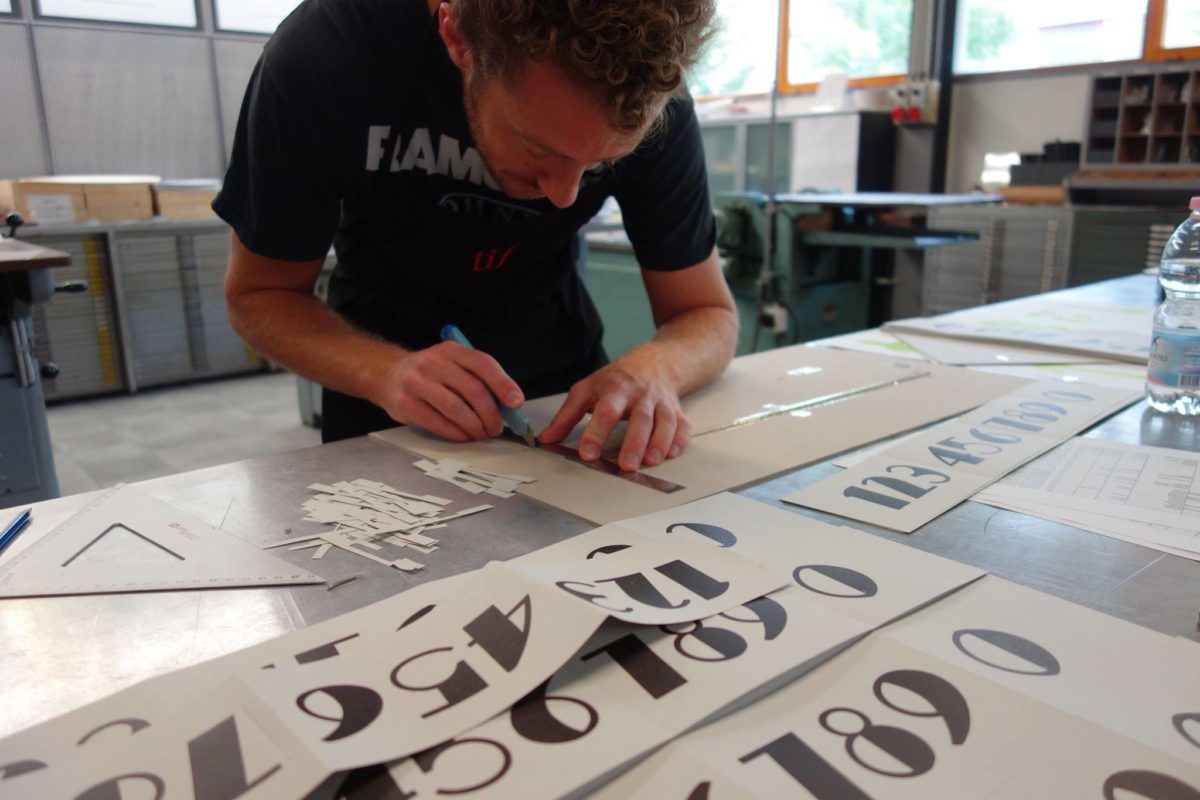